MISSIONARIES OF THE PRECIOUS BLOOD (C.PP.S.)

The Founder, St. Gaspar del Bufalo, had a great devotion to the Divine Blood of Jesus. He encouraged a number of Priests and Brothers to join him in forming a special group to promote devotion to the Blood of the Savior, and to engage in evangelization, missions and reconciliation, helping the sick, the poor, the outcast, and those in need of religious education. A short time later, a Swiss priest, Father Francis Brunner, became a member of the Missionaries of the Precious Blood.

In Ohio, during this same time period, many German people were settling in the north-western part of the State. Archbishop Purcell of Cincinnati traveled to Europe in search of priests and brothers to care for these immigrants. While there, he met Fr. Francis Brunner, convincing him of the great spiritual need of the Germans in Ohio. Within the year, Father Brunner, with a few members of the Missionaries of the Precious Blood, arrived in the United States. In 1843, by horse and wagon, they came to Peru, Ohio. From there, they branched out to such places as Marywood, New Riegel, Bismark, Tiffin, Fremont and Sandusky, and to many other places in west central Ohio.

Father Brunner took particular notice of a beautiful wooded area in the Peru, Ohio area, where the Sorrowful Mother Shrine is now located. He wanted to build a Shrine in America to honor the Mother of God, a place where people could come and pray for holiness and peace away from the busy world. He purchased a portion of the land, while the rest was donated by generous settlers. In 1850, a log cabin Chapel was built on the spot where the Stone Shrine Chapel now stands.

Since those early years, the Missionaries of the Precious Blood have been engaged in various ministries (apostolate) throughout the United States, Canada, Europe, India, Africa, Central America and South America. The Missionaries work in parish ministries, college teaching and ministry, prison and reconciliation ministry, directing of retreats and parish missions, military chaplains, and shrine ministry. The Missionaries of the Precious Blood minister in areas reflecting the social teaching of the Church and its importance in today’s world by promoting a culture of life through the proclamation of the Gospel of Life and though devotion to the Precious Blood.

The letters which appear behind the name of the members of the Missionaries, “C.PP.S.,” stand for the Latin: “Congregatio Pretiossimi Sanguinis,” meaning: “Congregation of the Most Precious Blood.” The double “PP” indicates that the word, “Most Precious,” in Latin is one word.

The Missionaries of the Precious Blood wear either one of two distinctive symbols: with the cassock, the missionary cross and gold chain, or with coats, the symbol of the chalice placed on the center of the cross. The cross with the gold chain reminds us of Christ’s great sacrifice when He shed His Most Precious Blood for our salvation. The letters: “INRI” toward the top of the cross are the Latin: “Jesus Nazarnus Rex Judeorum,” “Jesus of Nazareth King of the Jews.” The gold flash of glory about our Lord’s head tells us that the Passion and Death of Jesus made Him the King of all souls. The figure of the Crucified Savior deepens devotion and love of the Redeemer. Toward the bottom of the cross is the sacred Image of “Our Lady of Sorrows,” who cooperated so closely in the salvation of the world. At the very bottom of the cross are the skull and crossbones; teaching us that Christ, by His death, turned death into something glorious; the gateway to heaven.

The symbol worn on coats, displaying the chalice in red, recalls the courage of the Lord and the tremendous love which prompted Him to suffer and die for our salvation. The chalice of the Precious Blood is the Source of daily strength, the power which inspires members of the order to imitate Jesus in the love of God and neighbor. It is the symbol of God’s justice and loving kindness towards us. It is the symbol and basis of hope; the source of life and cause of joy.

Father Brunner chose the title, “Our Lady of Sorrows,” for this Shrine, because he wished to thank Mary for all the sorrows and sufferings that she endured with her Son in His cruel Passion and Death. He called on the people to put a greater trust in our Lady’s intercession, in the Mother whose prayers are always heard by her Divine Son.

We have golf cart tours from May through October (temperatures above 50 degrees)! Donations welcome!Please provide the information below leaving a date and time you would like to join us for a tour. 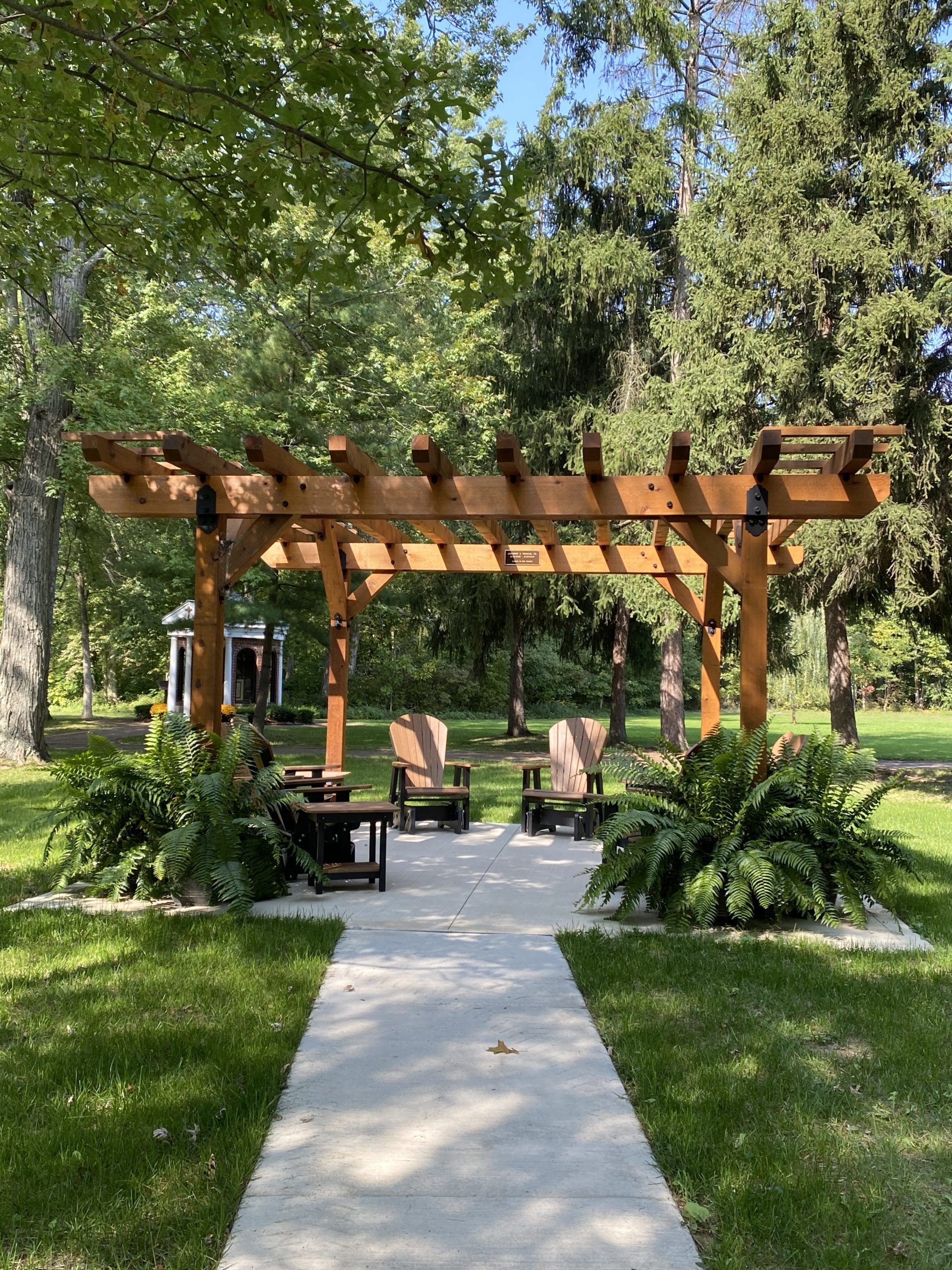